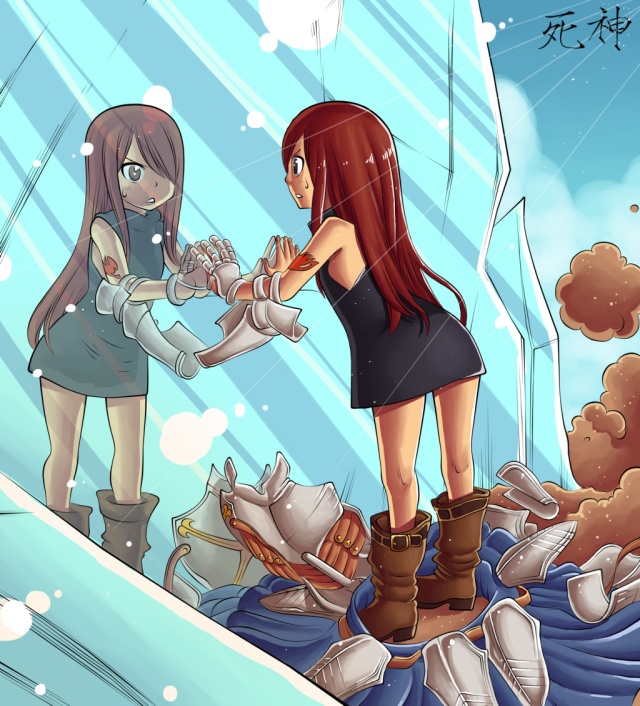 An eternal flame, a strange ice freezing it over and the manipulation of ‘time’; what does all this mean? – colour by Hitotsumami

I can’t help but smile after seeing the development with Erza at the end of the chapter – the possibility that this arc is directly related to Ultear becomes even more likely! The frozen flame returning ‘time’ to Erza (i.e her youth) really does stir up some interesting thoughts connected to a particular character we have recently seen in Fairy Tail, I wonder who it could be =P.

I’m still curious to learn why the Giants were battle-ready when they were frozen, did some suspicious event before the freezing spark the Giants into action? Erza does mention this point, so it is an issue that is relevant and will probably be a development that is revealed and covered later, looking forward to it.

That bothers me too, along with why there are only male Giants there =/

The Eternal Flame does seem to be the central focus this arc, both the treasure hunters and most likely Succubus Eye are in Taiyou Village to claim and capture the Eternal Flame. The origins and mystery behind the Eternal Flame haven’t been revealed yet, but it could be the reason why Erza has gotten younger (in connection with the ice likely to be the embodiment of Ultear’s ‘time’ of course =P). The flame is frozen but in conjunction with the overwhelming and excessive magic power and ‘time’/life embracing it via the ice, it could be the reason why Erza only ended up having her ‘time’ rewound when she reached the eternal flame. Just like how a flame gives off heat when it burns, it is giving off the magic power embracing it in its frozen state and if the magic power is that of Ultear’s, it would explain why Erza has gotten younger.

Another thing about the Giants, why aren’t there any female Giants? Do the Giants not die and being in the presence of the Eternal Flame actually grant them some quality of eternal life, i.e. immortality? There are lots of mysteries surrounding this village; their inhabitants, the deity they worship and the fate that they have found themselves in.

The title for the next chapter makes me hopeful even more that this arc is going to be directly connected to Ultear – ‘someone’s voice’. The ice potentially made up of Ultear’s life could end up manifesting a sort of consciousness and expressing the very feelings embodying it. Erza right now is facing a very reflective surface of ice, it could end up being the surface used by Ultear’s magic to converse with Erza or at the very least relay its inherent feelings which would, I hope, signal to Erza and the rest of Fairy Tail that the ice does have a connection with Ultear. The word ‘time’ is also used in the end narrative of the chapter – “why does Erza’s time go back in the Giants’ village, where everything is frozen?” It does seem to me that Mashima-sensei is hinting something quite strongly with that, especially when it could have been written as “why does Erza grow younger in the Giants’ village…” Time was used specifically in that narrative.

The treasure hunters of Sylph Labyrinth have some really useful weapons there, they actually managed to hold off Natsu and Gray for the moment, which is a surprise, but then again those two haven’t even gotten serious in the least. Once ways around the weapons the Sylph Labyrinth members use are found, they should be relatively easy to handle, well until those guys bring out a new weapon to figure a way around. Still refreshing and nice to see people without the ability to utilise magic take on those able to utilise magic, though it would help if those Sylph Labyrinth members were more likable. I’m real curious to learn more about these “treasures” found and hidden around the world, they could have some interesting application uses that not even magic can match. Also will these treasures be able to compliment magic users and amplify their ability? Succubus Eye sure seems interested in something about Taiyou Village.

Looking forward the next chapter and finding out if the arc really is developing in the way I strongly believe it is =).