Someone pinch me…I honestly can’t believe this, but Bleach has become so incredibly enjoyable to read (more then it was), I absolutely love it and this arc in Bleach is definitely what I’ve been waiting for ever since the Arrancar arc turned hollow. This arc is by far my favourite Bleach arc, it represents exactly what Bleach is about and covers [almost] everything I’ve been wanting from Bleach, ah my diminished passion has now been reignited ablaze. Thank you Kubo-sensei.

The Unohana and Zaraki story, how epic, I am devastated at what became of Unohana, but ah, how epic that mini-arc was. Two apathetic beings searching for a reason; that something which fills their hungering void up, that something which sparks a movement inside them, that something which gives them worth, the two violent and bloodthirsty Kenpachi’s both seeking that something which makes them feel pain, fear, fatigue,….and most importantly, alive. In a world which revealed itself as empty to the both of them, they both found the answers to their numbing questions in each other and within the torrents of emotions that expressed their state of being alive, the one feeling which rose above everything else within them, was joy, the joy of having someone else stand on the same plane of existence and understand just what they themselves saw and felt. 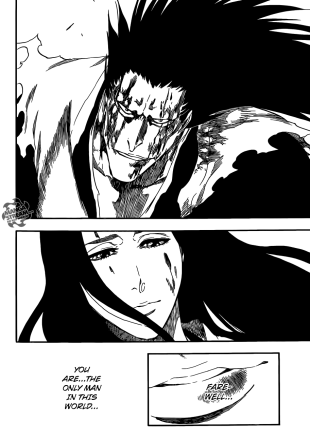 Zaraki may have stood on a level higher then Unohana, but she was the closest person to understanding him and Unohana, she understood the worth of Zaraki after her first encounter with him and realised just who the title of Kenpachi belonged too, and at that point in time, she even understood what her purpose would be. They brought out the true nature in each other as well as their true feelings…watching the two of them do battle against each other, was seeing them confess to their souls about who they are. It was both liberating and sorrowful witnessing their battle; it moved me, enveloped me and pained me. Unohana’s teachings embraced Zaraki like a mother embraces a child; close, tight…and full of love.

Sayanora Unohana Yachiru, you were extremely awesome and badass, but I’m still hoping you live, I want to see more of you! And how awesome, Zaraki can now communicate with his zanpakutou, although that zanpakutou belonged to someone else in the first place =/, I wonder what’s going to happen between those two.

The flashback of Isshin and Masaki, ah I’ve been waiting for this for a long LONG time and finally, I get to learn about it! I already knew Masaki was a badass from the moment she gave her life up to save Ichigo, but she is much more a badass then I thought. Willing to go against customs and protocol to save a life and stay consistent with what she believes, she is strong! The same with Isshin, he may seem aloof and lazy but when it comes down to it, he really gets serious. Love how the two of them go against their organisations rules in order to pursue what their beliefs are telling them to pursue, and with no hesitation to boot.

Aizen, hah, I knew I smelt something off when this flashback began, surprise surprise, it’s the one and only Aizen. Interesting to see that shinigami/hollow hybrid which looks like Ichigo’s Hollowfied form, I wonder if there is any connection, or is it just the way shinigami/hollow hybrids look when they reach their final forms? Either way, that encounter explains why Ichigo can utilise the Fullbring power – his mother, Masaki, was attacked by a hollow and some of its hollow energy was left inside her. So glad the Fullbring arc getting more substance from this flashback, I had initially thought that most of the Fullbring arc wasn’t really needed, so glad I was wrong.

Was also curious as to how Isshin, Ryuuken and Kisuke met, so it turns out it was all because of Masaki and that life-threatening circumstance. The reason for Isshin’s lose of power and why he had to assume the life of a human is also explained, love how unhesitating Isshin was when deciding to sacrifice his shinigami powers to save Masaki. And this page, epic:

Interested to see Soul Society’s reaction in regards to Isshin’s decision and what about Aizen, what does he have planned? Don’t tell me he had a hand in the Grand Fisher incident =/. Also does these actions of Isshin lead to the fall of the Shiba clan? Interesting how Ichigo is connected to a former noble house of Soul Society, I wonder how many people are aware of Ichigo’s actual roots, because he is quite something, no wonder his power is both massive and unstable. Very much looking forward to the next chapters for this flashback arc and what Ichigo will decide to do after learning the truth about himself.