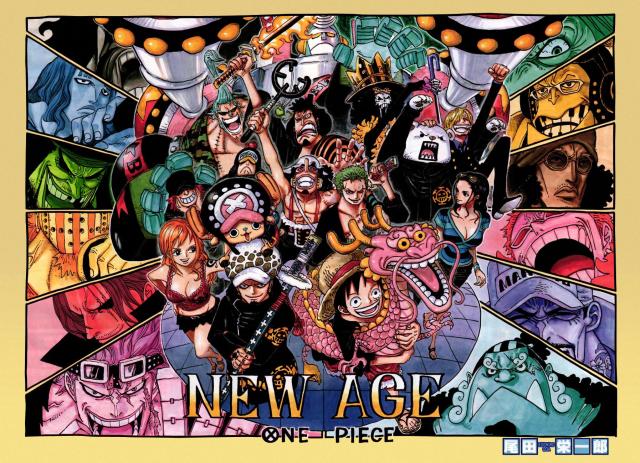 Indiscriminate to ages, the existence of time ticks by ever spectating the beginning and end of eras central to life. Like raging waves dissipating into non-existence, the end of one era sees the beginning of a new one raging behind it eager to take its place. The gears of an era existing to motion it in one direction eventually crumbles revealing new gears motioning the “times” in a completely new direction thus establishing a new age to lead people into.

The Alliance established between the Kid Pirates, Hawkins Pirates and On Air Pirates was quite surprising especially when each of them are competing with the same goal in mind – One Piece. Although at the same time they also desire to be central in ushering in the new era which was left open the moment Whitebeard passed away. All the rookies from the Eleven Supernovas got an extra kick of inspiration and truly realised that the new era was upon them and theirs to seize the moment Whitebeard confirmed One Piece’s existence. Now the current era has a lot of big fish so dethroning all of those big fish is entirely another matter and so when you think about it, it makes obvious sense that forming alliances with other rookies with like interests would be the most effective course of action. Very curious to see this alliance in action just what “waves” they are going to cause.

The alliance between Law and the Strawhats has been magical to watch, I just loved seeing them mess with the plans Doflamingo had in mind for his artificial Devil Fruit “Smile”  and completely destroy whatever desire Caesar had for showcasing to the world that he was the true “best scientist”. Caesar may be mad and evil but he has such a charming side to him and his passionately cruel side which is responsible for his twisted tragic stories and fake tears cracks me up everytime. I particularly liked it when he was telling his subordinates about the time he tried to stop Vegapunk, now we know that wasn’t what actually happened, but the way Caesar sold the story and won his subordinates hearts, it was gold: 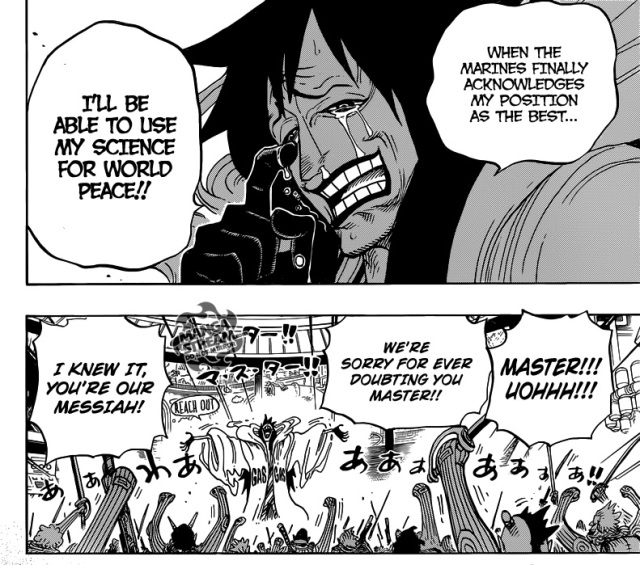 Still as much as I found that amusing, Caesar deserved his just desserts for lying and using people’s lives as fodder and that is why when Luffy showed and said this, my body shivered from the sheer badassness at what was just about to be unleashed:

Uh oh Caesar, you’re about to get a real taste in what a pirate is…

A Grizzly Magnum straight to the stomach, ‘ouch’ doesn’t even begin to describe how badly Caesar got owned…And Caesar thought he could scare Luffy away with logic, hahah he just got a schooling in how the Strawhat pirates roll, like bosses.

Speaking about people getting owned, Vergo sure did also end up on the receiving end of one when he underestimated Law and his Devil Fruit. Quite impressive to see Law able to cut so cleanly and powerfully through a Haki infused defense, so it was not only the Strawhats that under went intense training for the New World. Loved how the smile Doflamingo usually wears was all but gone the moment Law dismembered Vergo and expressed the wave of the New Era approaching.

Monet, I like her, I like her a lot, that is why I am so confused at the current situation of things. She doesn’t seem like a bad person, but I do admit that her sadistic, cold and very Doflamingo-like nature is very concerning. I still think she is a good person, which is why I believe why Zoro didn’t use his full force on her, and this goes beyond her just being a women, because Zoro already displayed that he can and has no query going full force against a women (i.e. his bloodlust). Zoro was extremely badass in the battle against Monet, and hahah awesome, Monet had the Yuki Yuki no Mi and was a Yuki-Onna, guess I was right =P, but her very Doflamingo nature got me thinking about a theory, which I will get on to later. The whole “Die For Me” chapter pretty much through me into state of perplex, Monet seemed concerned about Doflamingo killing her if she failed her mission, but she had no qualms dying for him. I didn’t get it and things just didn’t mesh for me, which is why I came up with this theory:

We already know Doflamingo has some kind of puppeteer ability, but what if Doflamingo has abilities that go beyond body manipulation and reach into realms of heart manipulation and mind manipulation. For example, what if Doflamingo is able to influence a person via their heart and is able to impose some of his will through them, thus putting the person in a state responsive and cooperative to and with him. It could just be Monet’s nature, but her very Doflamingo like behavior – sticking her tongue out when excited (during her battles with Luffy and Zoro) and her sadistic actions match what Doflamingo is like so closely, it does make me suspicious. The fact that Doflamingo and Monet reply to Vergo in the same way when he says he has something but doesn’t is also very intriguing, though it may just all be a coincidence. 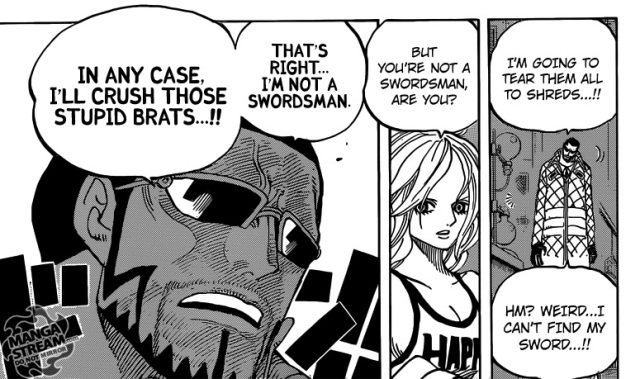 I also don’t get who threw the paper at Chopper telling him not to do anything =/, sure Law didn’t have any sea stone cuffs on, but where would he find the time to pull out a piece of paper and write that message when he was being watched? Monet was the only one out of sight and she has in the past been seen regularly with a pen and paper, though I am curious as to how she would write with her wings, but since I’ve never had wings, I got no idea if such a feat is possible or impossible =/.

Did Monet throw the note?

Monet clearly notices something odd when Chopper ran away after reading the note, so most likely she was aware of Chopper. The curious part though is why didn’t she go after Chopper and stop him?  Did she view Chopper as nonthreatening and not someone to bother with? But this goes against her whole wary characteristic we came to expect from her this arc =/. It’s a very interesting reaction by Monet.

As for the reason why Monet threw the piece of paper, I believe once Caesar slightly squeezed the heart he thought was Smoker’s (but which was in fact Monet’s), he released some of the constraints Doflamingo’s held on Monet thus giving her some predominance of her own will which she used to help keep Law’s plan in motion – yes I believe Monet and Law are working together. Law may have at some point after acquiring Monet’s heart temporarily severed the influence from Doflamingo and discussed a strategy to stop Doflamingo and Caesar. This would explain why Law let his guard down a bit when it came to Monet and her scouting ability and why he made this comment which I believe was directed at the “Master” Doflamingo: 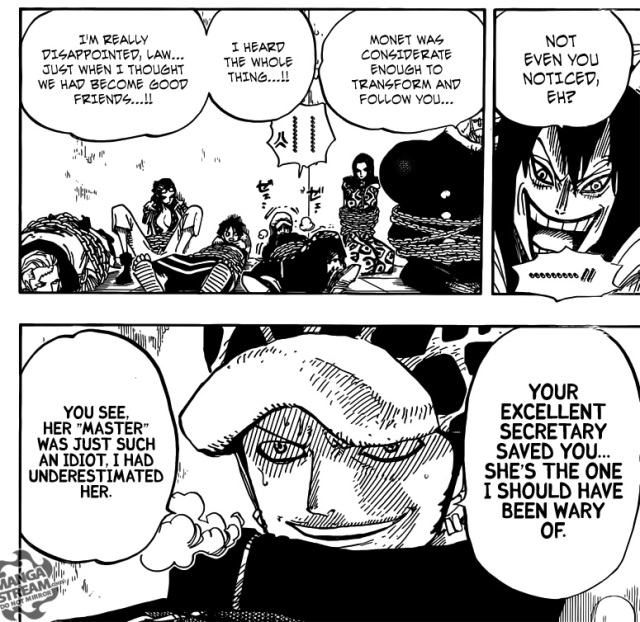 Monet reacting to the heart squeeze

If Doflamingo really can influence a person via their heart, it would explain why he destroyed whole towns whenever Baby 5 got engaged. While Baby 5 has a serious personality flaw, Doflamingo’s influence over her is threatened whenever Baby 5 gets engaged, because the chance of Baby 5’s heart belonging to someone else becomes somewhat real in those circumstances.

Even Crocodiles’s comment to Doflamingo in response to Doflamingo wanting to work with him makes it seem like Crocodile was aware of the fact that Doflamingo is able to manipulate an individual beyond their body:

The way Zoro acted towards Monet also has me curious, it was stated by Tashigi that Zoro held back because he doesn’t like harming women but I don’t really think that’s the case, because he has shown intent to kill even towards a women. I believe it has more towards Zoro sensing something off with Monet, beyond her merely being a women. It could just be that through his intense training Zoro became more in tune with his instincts and is now able to sense things beyond what the five senses can normally sense. Zoro could have easily killed Monet and he even had reason to, she had targeted his nakama injuring Robin and also attempting to grievously injure both Chopper and Nami, but for some reason Zoro held back.

As for why Law gave Caesar Monet’s heart, to keep Smoker’s heart to himself and to prevent Caesar from gaining anymore bargaining chips. Even if Caesar found out he had Monet heart’s, he wouldn’t suspect Monet, but rather be mad at Law for playing him. Law’s comment about underestimating Caesar’s Excellent Secretary which Doflamingo has control over resounds even here because Law may not be aware of the weapon contained in the third research lab and about Monet about to blow it up. Law didn’t predict Monet to be so effective because he viewed Doflamingo as an idiot (if we still assume, the “master” Law referred to was Doflamingo) and so he didn’t expect such a move from Doflamingo i.e. blowing up the Island and having it engulfed in poisonous gas. But hilariously and fortunately, if Law did give Caesar Monet’s heart, Caesar is about to save everyone (except himself) and throw a massive spanner in Doflamingo’s plan. I assume once Caesar squeezes the heart, Doflamingo’s “influence” over Monet will be broken. (Will Monet join Law’s crew?).

It would be cool if Monet wasn’t the cold and sadistic person she is currently being portrayed as but this theory is based on so many assumptions and stretched interpretations of developments this arc and previous arcs. Still the idea that Law has a counter to part of Doflamingo’s ability is an exciting thought, especially when you realise that Law is the one destined to take down Doflamingo (another assumption =O).

Another development which I was thrilled to find out while reading these chapters was that Tashigi is able to use Haki =D. Ever since Smoker revealed himself and that scar on his face, I’ve been predicting that the one who caused that scar was Tashigi, because her knowing how to use Haki would establish herself as a player in the New World not just some extra..

Very much looking forward to the coming chapters and the conclusion to this arc, going to be so exciting to find out how the developments this arc affect the rest of the world of One Piece and the “big fish” in the New World.