The real life game of Btooom! where an island becomes your battleground for survival

A survival action thriller story similar to Gantz (minus the horror) where participants are placed in a “game” where they are required to accomplish a certain objective before they are allowed to leave. The restriction here unlike Gantz where the players were bound by the Gantz sphere, is the fact that the island is the battleground for the game.  That setting makes Btooom! seem even more similar to the story of Battle Royale, where students were sent to an island and placed in a game of “last man standing” requiring the students to kill each other until only one student is left surviving. The “game” of Btooom which the competitors are playing see them utilise bombs which are provided for them to defeat other contestants and collect the “IC chips” left behind. The exact purpose of the game remains a mystery but the objective of the game is to collect a total of eight IC chips.

Battle Royale provides a massive inspiration for how Btooom! develops the story around its characters. Those that throw away their humanity immediately and adhere to the rules of the game quickly begin to pursue the goal of collecting eight IC chips regardless of whether killing other contestants is required. There are those who reject the whole morality and existence of the game and ultimately pursue a plan of getting off the island in another way seeking anyone and everyone who does the same. But just like how things developed in Battle Royale, a humans desire to survive supersedes any rationality of reason and any sympathy they may or may not have had with other individuals. In the world of life and death, survival becomes the center of reason and everything things else that may have existed before competing in the game becomes little more than a distant tingling in the players memories. 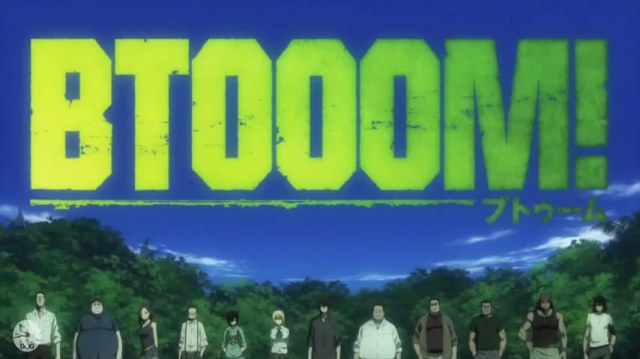 Inner moral conflict clashes against the instinctual desire for survivability

It’s a very fascinating and interesting type of story but it’s leaves such a tragic and sorrowful aftertaste, but more than anything it leaves such a memorable impression on you. That is what happened with the Battle Royale film when I first seen it in the early 2000’s, it was such a shock to me to see such a callous and almost ruthless story like that, I was left speechless and blank at what I had just seen. It was something so different and something so foreign, the impression created from watching the film instantaneously became embedded into my memories and even to today, the feeling I felt when watching the film remains fresh. It left me with conflicting thoughts about what was right and how sad the events taking place in the film were, to not want anything to happen like that and to wonder if placed in such a situation, would I be able to kill my fellow classmates?

Battle Royale paved the way for my love for Japanese movies and the unique flavour they had from what I was used to. It left me in awe at the type of stories Japanese people come up with and the longing to see just what else Japan had in store.

While Btooom! doesn’t reach the same level of intensity and depth as Battle Royale and Gantz, it maintains the key theme of human beings inner moral conflict and expands on it through scenarios requiring the characters to hold life and death within their hands and make a decision of how to proceed from the crossroad they find themselves at.  In one sense it’s a game centered around survival, but in another sense it is a story about development.

The basis behind the type of characters present on the island and participating in the game encompasses each individual character’s past and interaction with the world. Just as death reflects itself back on life, the real-life game of Btooom forces the life of each character to reflect itself back onto their past. The choices they made and the reasons behind the situation they find themselves in, why it happened and what to do about it now.

The main character Sakamoto Ryuuta is introduced as someone who is, excuse my language for a bit please, a complete dickhead. He is introduced as one of those unlovable characters who is selfish and immature (like how Kei from Gantz was introduced, or how Kouichi from Kurogane no Linebarrels was introduced). Introducing a character in such a way is a double-edged sword; it frustrates any love you want to have for the main character and limits any feelings you have to the level of annoyance. On the other hand, it leaves plenty of room for the character to develop and like Kei in Gantz or Kouichi from Kurogane no Linebarrels, after certain incidents they rise about their past selves and become the heroes the manga demands them to be and the badasses they’ve been holding themselves back from being.

Ryuuta upon waking up on the island becomes a completely changed man, it’s almost weird just how contrasting his two selves are so early on in the manga. I’m not sure if it’s because of the non-existence of computers and internet on the island, but even before major incidents take place that truly develop his character, he appears as someone already changed. His sensitive, angry, selfish, desperate, indifferent self are nowhere to be seen. The difference feels so weird, especially when we are reminded of how much of a bastard Ryuuta was when we see him through the story flashbacks. There is an intriguing level of depth to Ryuuta and seeing his character, personality and self unfold and develop through situations in the story leaves a fascinating and delighted feeling within.

Other character’s development are also handled quite well, in particular Himiko’s trauma of her past and what happened early on after arriving on the island. It leaves Himiko in an on edge and vulnerable state to the point of being immensely apprehensive to anyone she meets. Such a development has a strong sense of cause and effect. It is also interesting to see the breaking point of characters, the level at which they lose hope and the reality they interpret from the situation they find themselves in. What do characters do when they succumb to the desire of escape? What do characters do when they become desperate?
The game of Btoom attempts to explore the conflict of morality struggling alongside and against the desire of survivability, and while there are times when such themes can be more strongly focused on, Btooom does a good job with handling them.

The presence of bombs as weapons in the story adds a unique twist to Btooom! helping to set it apart from other survival action stories. The restrictions of how bombs can be used and by whom along with the limited number of them creates a very tactical driven and dynamic battleground for the battles. The presence of radars and the need for supply cases which fall daily forcing characters into battle for it, help shift the survivability aspect of Btooom! into a very dynamic and thrilling aspect.

Looking forward to seeing how Btooom! develops (currently up to chapter 49) and of course the upcoming anime produced by studio MADHOUSE =D:

Great how the art style is refined in the anime, love it!