A cold and ruthless personality hiding a scared and traumatised girl

And so we finally learn about the agony Satellizer had to endure since the day she entered the el Bridget household, of the torment she suffered through at the hands of her half-brother, Louis, and of the hellish fear and trauma which shackled her and cracked her will…her pain and the nightmare which was her life, we see it all.

…In the face of power, anybody would tremble and quake, but for the person wielding such power, what do they do? What should they do? Can the feeling of power twist a person? Can it make them blind to the suffering of others and numb to the cries of their own heart?

Louis el Bridget, the only son of the esteemed el Bridget family, and half-brother of Satellizer el Bridget. I honestly have never wanted to punch a fictional character more than I do now. Well it is in fact the first time I actually wanted to punch a fictional character – I do get annoyed at certain characters, but never to the point of wanting to punch something non-existent…that is until now. He has been blessed being born into the reputable and powerful el Bridget family, but why is he such a scum? I understand that his mother was angry at and hated Satellizer’s mother and Satellizer (who was an illegitimate child of the el Bridget head), and that she encouraged her son to mistreat Satellizer, but why did it develop into something so torturous? Throughout these chapter, whenever I saw Louis, my fist couldn’t help but tremble and my arms couldn’t help but tense up; my fist wanted to express just how disgusted I was at how he acted…an intense rage (not hate) towards his actions…how can someone honestly take enjoyment in the suffering of others? How can they break a person down to tears (and worse), and still take satisfaction in it? Doesn’t their heart begin to tear when they see the suffering and pain in another? Aren’t they consumed by an overwhelming sadness and sorrow when they realise they are causing pain to another human being, a human that feels and breathes just like them?

Maybe I am too naive, but intentionally causing pain, be it by words or physical, to another person causes pulls on my heart that leads me to reflect back sorrowfully. I understand that ‘you can’t please everyone in life and people are bound to get hurt whether you like it or not’, but what saddens me and what I don’t get, is that people can actually find enjoyment in causing such levels of pain (both physical and mental) to a person. Treating them as “possessions” rather than a person just like them, how can people do that?

Louis, consumed with status and lacking the knowledge for the value of a life, treats the people whom are “lesser” (in social status) than him and who he finds interesting, as his “possessions”, his “toys”…including his own sister… 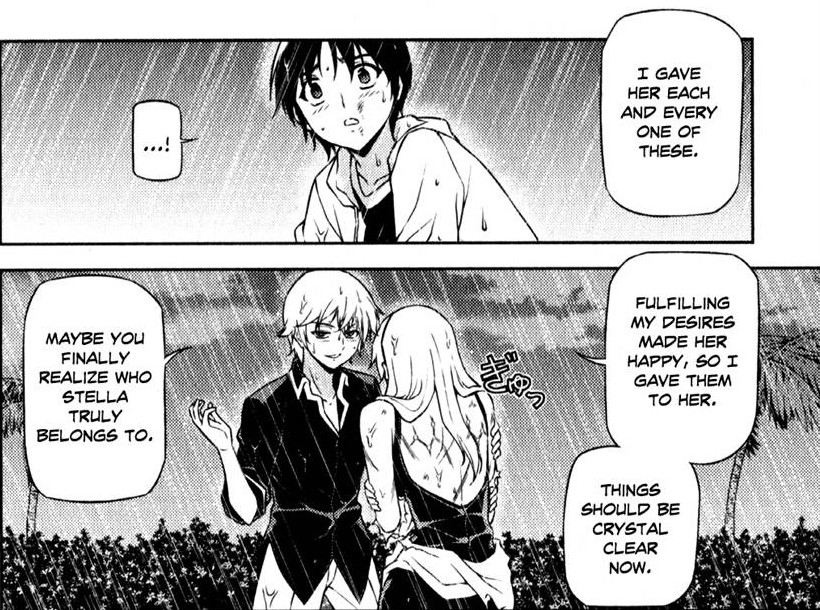 Taking satisfaction in torturing his own sister...insane doesn't even begin to describe him

To me, it doesn’t seem the character Louis understands the value of a human life and of the exact pain he is causing the people he mistreats (more like tortures). He was only focused on himself and satisfying his own twisted desires – he calls his Pandora partner (Holly Rose) a “filthy, used Pandora” and treats her as merely a replacement for his sister, whom he sees as his “toy” and he actually believes they are in a “special” relationship and that they enjoy it…what the hell man? Aoi Kazuya took the words out of my mouth when he said “you’re insane”. And Kazuya is right, Louis didn’t have an upbringing that clearly defined to him what he shouldn’t do to others, and now he has become insane, a psycho, twisted by the power he wields and addicted to the control it has over others. Someone so blind and ignorant to the pain and feelings of those around him, that he believes he is expressing his love to his “precious” person by treating them as a possession and sexual abusing them and humiliating them. And even if he knows what he is doing is wrong, he plays it off by seeing Satellizer and Holly as “dogs”, the soldiers (Pandora) who are controlled by the people with power (the el Bridget family holds power over the military). That may be the reality of things, but it’s just sickening. What does human life mean to such people? How much do they value a human life? I may sound foolish in this post, and I may have expressed just how ignorant I am, but the suffering of Satellizer and Holly and the actions of Louis hit me hard…

Holly...poor Holly. Why does she even like such a scum?

In the end, I realised, while I am disgusted at Louis’s actions, it is also actually an extreme sense of pity I have for Louis. The only way he knew how to express himself was through that twisted sadistic way of his. Those feelings of power he had in the past, to do what he wants to Satellizer impacted on him and twisted his self to be like that causing him to form an obsession, which he thinks is a deep love, for his sister, Satellizer (whom he calls Stella). Louis doesn’t know better, he is a child who thinks he can do what he wants and doesn’t realise the cruelty and overwhelming pain and trauma he is inflicting on others…he is blinded by the power his family wields.

The chapters with Satellizer broken down by her trauma and fear of Louis was saddening and almost unbearable to read. Holly thinking negatively of Satellizer from the moment she meets her, before she even understood the circumstances surrounding Satellizer and the torment haunting her, didn’t help (but we get to learn the actual reason why Holly hates Satellizer later) – why does everyone think so badly of Satellizer the first time they meet her? It seems that in this manga Satellizer will always be misunderstood and hated by people when they first meet her – like in West Genetics Academy (Lana, Ganessa, Chiffon, Elizabeth, Arnett, Cleo, Attia, Ingrid, Miyabi, etc…all of them disliked Satellizer in the start), but at the very least, there is one person who understood her in the beginning – Kazuya. Maybe that’s why Satellizer felt so differently with and around Kazuya, because to him, all he saw was the girl beneath the cold and brutal shell she surrounds her fragile self by – she found a place where she could truly be herself.

Kazuya was the average-type male character in an action/fan-service type manga like Freezing; residing in the background of the story and not taking the initiative. But this arc changed that. While I did want to punch Louis, I was aware that this was only a manga and crossing the bounds of existence and logic were impossible, so all I could do was put my hope in Kazuya (and the authors) that he would free Satellizer from the torment and suffering of her past she was so deeply scarred by. Kazuya may have taken longer than I wanted to take action, but when he did, when he finally realised the scars Satellizer is tormented by, boy was it good:

You could just feel the clouds lifting and light piercing the darkness Satellizer found herself in, a light to guide her onto the path of liberating herself from Louis

The almost “unbearable” parts of the arc with Satellizer broken by her trauma and fear of Louis may have been unpleasant to sit through (they were too sad), but it expresses really well the aphephobia Satellizer developed in her childhood and adds real depth to her character and her reasons for fighting, for continuing to fight even when she gets overwhelmed and knocked down, for resolving to never lose (to not return to that “hell”). When Satellizer was snapped back to her senses by Kazuya’s words and feelings of love for her, when her will was set ablaze, Satellizer just owned from that point onwards. No more a slave to Louis’s twisted sadistic desires, but a liberator for herself, to free herself and follow the future she wishes.

How incredible this is; the power of bonds to heal the cracks in a heart and ignite the fire in her resolve ablaze

Satellizer’s promise to her mother (before her mother died) was highlighted before, but now we get to see just how much weight was truly behind that promise and those words exchanged. Seeing how broken Satellizer was from the trauma of her past makes her reasons for fighting so much more believable. It’s one of those moments where you can completely believe where the characters strengths come from – the weight behind their will (Berserk establishes this epically in its story, Claymore does a brilliant job as well, and while not on the same level, Freezing does establish this greatly too in my opinion. You could even add Naruto to that list, as to an extent, you can believe the weight behind Naruto’s resolve when you realise who the “two Suns” powering him are). That unyielding will which refuses to lose, that unshakable desire to reach for the power inside herself even if it cost her her life; her resolve, her determination, her conviction in wanting to escape her binding and release herself from her “hell”, I believe it all.

The will fo Kazuha lives on in Satellizer, and now empowering her, if seeks her liberation as well

Satellizer getting over her trauma (thanks to Kazuya healing the cracks in her heart and psyche) and resolving to express her strength (which Kazuya’s sister, Kazuha gave her) and escape her servitude was really cool – she got over her fear!! The fact that she unleashed the power she originally couldn’t control but trained tirelessly to, in order to escape her cage and tear the chains binding her to shreds was completely badass and refreshing – oh yes, she’s no more tormented by her trauma!! – since Kazuya accepts her, she has decided to reach for that “light”, that “light” which has given her a direction to cast her hope in, that “light” called Kazuya who has given her his love.

Hell yes! Grab a hold of your conviction, thrust yourself forward, pierce through the darkness and chains binding you, and reach for the future you so desperately wish for! You can do it Satellizer!

Kazuya also manages to look like a real man for a moment when backing Satellizer with his abnormal talent =). The Satellizer and Kazuya relationship really is enhancing immensely this arc, it will be interesting to see what happens after it. The climatic battle is still not finished, in fact the next round has just begun and now Satellizer is filled with the resolve and desire to free herself. Hopefully Holly also manages to get over her feelings for Louis…he is just sick, I doubt a beating would change him, but you never know…still she is too good for him, way too good for someone like him.

Kazuya really has been looking more like a man this arc. His actions even moved me

I’m REALLY looking forward to the next chapter and seeing how this arc concludes (enjoying Freezing so much now). I didn’t think this arc would be this intense and deep but it is and I’m so happy for Satellizer – she got over the trauma haunting her! After all the suffering she endured, to see her free from the past, it feels great – both inspiring and moving.