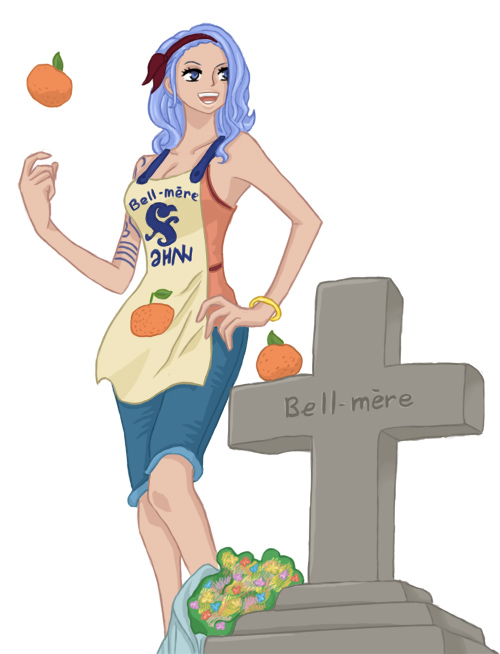 Did Nojiko start up a tangerines business? And using Nami's tattoo as a logo, how cool

It’s quite the tricky situation Luffy and Jinbe find themselves in. Both have something to protect and both have their ways in wanting to protect it, and herein lies the differences. Small differences that drive walls between people, neither wrong yet neither in support of each other.

…For Jinbe, he wants nothing more than to carry on Queen Otohime’s will and help the Fishmen move forward towards a changing future where Humans and Fishmen coexist and most importantly understand and respect each other. I feel for Jinbe, he has witnessed the times where the Fishmen have reached their hands out only for it to be slapped away by some foolish and narrow-minded humans. Jinbe himself was a “wall” to Queen Otohime in the past and he feels responsible. 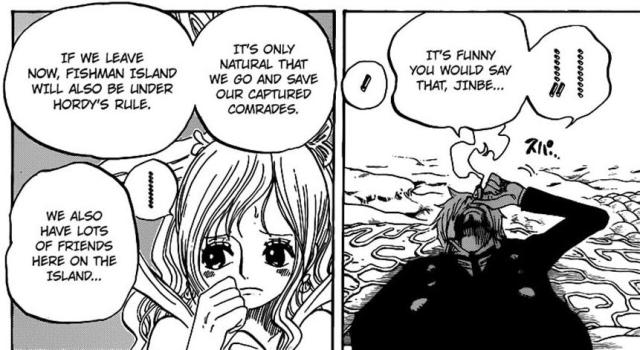 A not-so Black and White scenario

Luffy may not be good with words, but in his case, as explained by Sanji, Luffy also has things he wants to protect. Luffy cannot turn a blind eye when one of the most precious things he has attained, if not the most precious – his Nakama – is being threatened. Luffy also cannot allow the country Jinbe and his other Fishmen friends are from – Fishman Island – to be taken by Hordy. Luffy is not the patient type of person, he cannot stand on the sidelines and wait for Jinbe to handle things. Luffy has sought after strength for the freedom to sail the seas and to protect his precious Nakama. Luffy is already aware how painful it is to lose something precious to him, and he is painfully aware how it feels to be useless and unable to do anything. As long as Luffy has the strength to protect his Nakama, he will protect them until the end, the very end. While Luffy may not be able to express himself through words, he expresses himself through his actions… 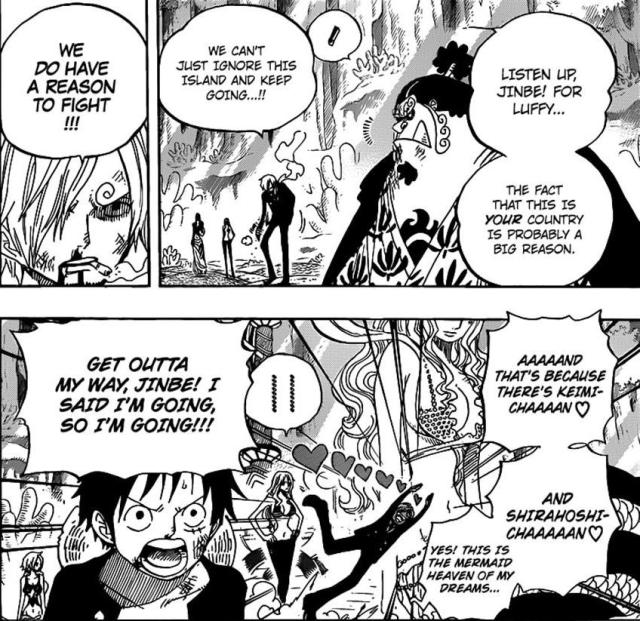 Yes indeed, Sanji can definitely not ignore this Island, the Mermaid Heaven of his dreams

The best choice in this situation would be to leave Hordy to Jinbe, but Luffy is quite stubborn and I wonder if he would do that – maybe Nami, Robin, Sanji, Chopper or Franky can convince him to leave it to Jinbe. Still, I believe Luffy is really going to destroy Fishman Island (I wonder if it will be intentionally? hmmmmm) – Madam Shirley has never been wrong with a prediction =P.

Chapter 629 also revealed new techniques by Robin and Brook. So Robin really is able to create a new “self”/clone with her Hana Hana Fruit – how amazingly cool. Hilarious how Sanji rushed in to save her but ended up caught in the middle of the intensity – poor guy. Still got love how for Sanji protecting a woman isn’t a thought, but instead an instantaneous reaction. He truly is the King of Chivalry. As unfortunate as he is (being stuck in hell for 2 years), his endurance through such sufferings has been rewarded through him finding himself in the Mermaid Heavens of his dreams. Lets hope Sanji gets more opportunities to indulge himself in the pleasantries of the heaven he dreamed about while he still can =). Anyway back to Robin, its exciting thinking about what else she is capable of doing after seeing her being able to create clones with her Devil Fruit. Curious to learn what other tricks she learned when with the Revolutionary Army during the two years.

It's time Pappug, Death has come to collect...

Brook, he REALLY is a dead man!! I can’t wait for the jokes and gags he will start cracking with the ability to release his soul from his skeleton. And hahah, a ghost getting a nose-bleed when talking about the first thing he did when using this ability…Sanji is so going to be jealous at Brook…will be interesting to see how this ability comes into use in the future, but however it will come in use, it’s terrifying the tears out of Pappug!! I hope Pappug gets Zoro his sword instead of a key, because I would like to see Zoro bust himself out of prison (just like the badass he is) =D.

Well now, Hyouzou sure got more interesting. I wonder how Zoro will fight a drunken swordsman if he ever meets Hyouzou

Pretty cool having the Fishman Pirate members introduced again in chapter 630. Along with their abilities, we also get to see [some of] the “weaknesses” some of the New Fishman Pirates possess. Daruma’s fangs have the potential of being injured, Dosun reliant on Energy Steroids, Hyouzou a drunk (but that may make him stronger lol…), and Ikaros Much dislikes fire. I’m not sure about Zeo – maybe talking too much can nullify his camouflage ability by giving his position away and subsequently lead to his defeat =/.

That's some serious side-effects there...

The scene with Hordy in pain was interesting – are the side-effects of the Energy Steroids messing with his body? The Sea Beasts are terrified of the changes, so maybe the side-effect is pushing Hordy’s power up and consequently causing his life to deplete faster =/. Most likely it’s modifying him someway, because he will need more power if and when he battles Jinbe or Luffy. The Sea Bear was quite amusing – especially when you think about the Sea Bear in SpongeBob SquarePants.

Looking forward to the next chapter – curious as to how this arc will continue unfolding. And how will the Mermaid Stealer-Caribou fit into all of this =P.