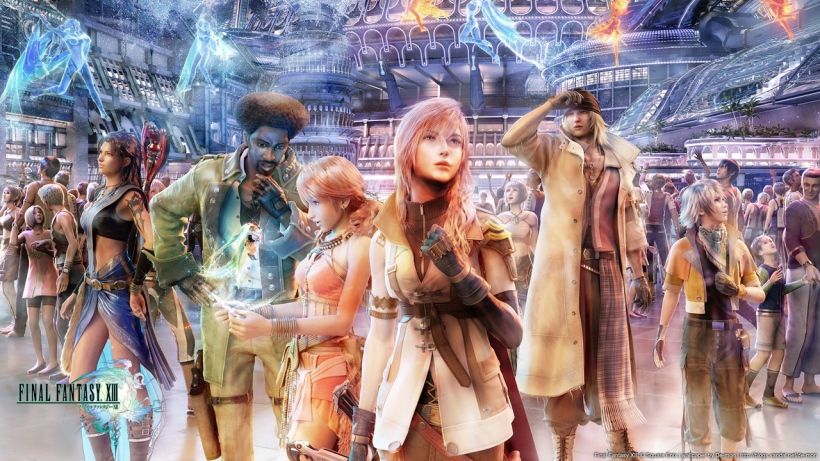 Together and against it, they walk forward struggling against their Fates to create a miracle and make their wishes come true

I didn’t really think much of a Final Fantasy game and I certainly wasn’t expecting much from Final Fantasy XIII (Final Fantasy games to me prior to playing FFXIII just seemed like games to spend a ton of time on – 100+ hours, and I wasn’t really enthusiastic about spending that much time on a game). I got Final Fantasy XIII and decided to play it on a whim, and how surprised I was when I realised how really caught up in the game I was. The amazing cinematic sequence that introduced the game and main characters and the start right in the middle of the action did seriously grip my attention and begin to catalyst my nonchalant desire to play this game. 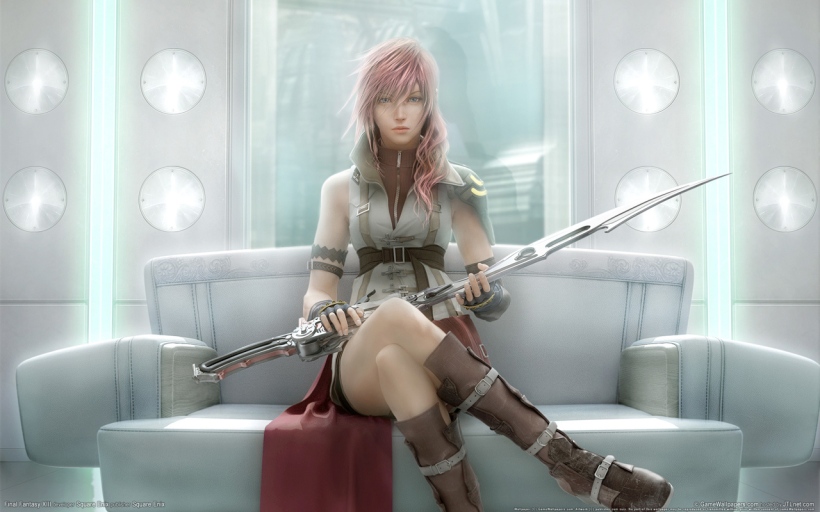 Compassion and passion hidden behind her cold and standoffish front

The more I played this game, the more I fell in love with it. I’m someone who enjoys the story and characters more than the gameplay of games (lol I should read a book instead =P, but games are fun), so having a story-driven Final Fantasy was incredible to play. The best thing about this game were the characters and how intertwined they were with the story, which I found fascinating (will-power and how far humans can take it, I do wonder that at times). I really did enjoy watching the characters develop and the story about their despairing fate both slowly and rapidly reveal itself around the whole setting of Cocoon, Pulse and the fal’Cie. It was quite something to see each character dealing with their respective flaws, breaking down, reaching out, uniting, realising, coming to terms of what to do, and together building up with their new-found resolve.

They walk forward into the darkness to grasp that "something", that something called freedom in the form of hope

The cast in FFXIII I loved, and they are my favourite cast of characters in the Final Fantasy games I’ve played (played FFVII and FFXII after I played FFXIII). Before playing the game, the only characters I really thought were interesting were Lightning (yeah her name is cool) and Fang. From my narrow-minded perception before playing the game, I had thought of Snow as annoying, Sazh as pretty lame and I didn’t really think Vanille was all that interesting, but hahah how wrong I was:

>> Snow was awesome and he does seem like a character who if they knew Cloud Strife from FFVII, would idolise them (yeah the “hero” type character). What won me over was Snow’s optimistic nature; his fiery and emotion-filled personality that refuses to cave into despair and have the life of his fire/soul/existence engulfed and put out.

>> Sazh was hilariously awesome, I honestly did not expect myself to like Sazh as much as I did – he brings so much colour and humour to the story.

>> Vanille, now she was the “annoying” character, but I wasn’t troubled by her, in fact I was really impressed at the depth of her character and how that “happy and cheerful” mask she wears during the continually despairing situation in FFXIII was just a method of escapism for her from the true “fear” and “pain” she hides deep within. Not knowing what to do and in a sense being a prisoner to oneself (her tendency to run away from problems), did strike a chord with me and I ended up really liking her character and felt joy when Vanille (thanks to the support from the other characters) did learn to stop running away from her fate as a l’Cie, and instead to come to terms with it.

>> Hope in my view is the most development character in FFXIII. Now I’m not exactly a fan of angsty characters, but when done right, I cant help but love them. Watching Hope struggle and held prisoner to his anger while he is desperately trying to figure out what he should do really did keep me interested in him. Being thrown into the “fate” he finds himself in during FFXIII threw him into turmoil and his anger towards Snow was the pillar he supported himself with. As the story expands and Lightning and Hope bond, it is moving see Lightning become that “motherly” figure (in her own way) Hope needed, and at the same time as providing him with emotional support, guiding him onto the path to find himself. With help from Lightning, Hope is able to mature into a brave and wise young man.

>> Fang – well she’s my favourite character in FFXIII. I even was a fan of her before I even played FFXIII – yeah I really like those “tough guy/girl” type personalities (also like Lightning). Fang’s caring side for Vanille and her eventual realisation of her and Vanille’s “new family” further strengthens the bonds between the main characters and makes them even more lovable.

>> Lightning, she is awesome (yeah my second favourite character from FFXIII). Her military hardened personality is badass and so is the fact that she wields a gunblade. Lightning initially distances herself emotionally and physically from things that annoy or upset her, but overtime she shows compassion and begins to see the errors in her approach. Watching her take Hope under her wing and become more compassionate to others and ultimately step into her role as “leader” makes her character so much more 3-dimensional and lovable. Really excited to see what happens to her in FFXIII-2. 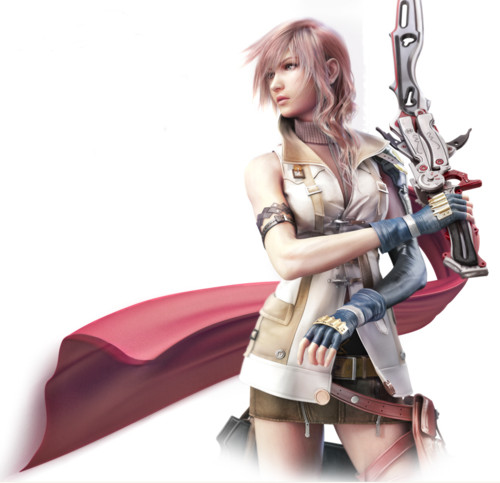 Independent and determined, Lightning acts as a protector for those she cares for

I loved all the characters, but even more so, I loved how the characters came together with the story. The doomed l’Cie struggling, fighting, resisting, hoping and finally smashing a hole in the hallway filled with doors pathing to one point was spectacular. A hole to lead the l’Cie onto a new path, a path on which to move forward on…Sure the character actions and the story development may not be logical or make much sense, but quite honestly rather than mentally satisfied (which I was), I felt spiritually satisfied and I found how things played out truly beautiful. More than a game bringing forward entertainment value, Final Fantasy XIII to me was a liberating experience.

FFXIII was a story-driven game and the fact it was more linear than other Final Fantasy games (no towns and not much character interactions) does help to keep the story flowing and prevent it from getting interrupted. I did notice when I was playing Final Fantasy XII that being distracted with sidequests, exploring towns or grinding to level does take away from the “flow” of the story and lessen the effect the story has on you (and there were quite a lot of side quests), though those side quest were still extremely fun. While it is sad there were no towns in FFXIII, I still love how the story flowed smoothly and allowed you truly enjoy it without much distractions and several hour-long gaps before continuing the story again. Also the Cocoon level designs were very linear but I was constantly in awe with the visuals of the level around me (well in front of me since I was looking at the TV, but I was so immersed in the game, it felt like it was around me) to care about the path in front of me. I had craved a level like Gran Pulse since the start of the game and so when Gran Pulse was introduced, I was extremely =). Maybe it could be because I didn’t go in playing Final Fantasy XIII expecting an RPG game, but even if Final Fantasy XIII failed at delivering the RPG elements many fans desired, I still feel as a game on a whole, Final Fantasy XIII was (and is) amazing.

I won’t write much about the extremely creative and beautiful world-setting and the graphics because they were seriously epic and had left me breathless and amazed so many times (the animated sequence when the group returned back to Eden after Gran Pulse was so very epic), but I want to talk about the combat system – the Paradigm Shift battle system. The Paradigm Shift battle system is my favourite combat system from the Final Fantasy games I’ve played, the fact that there are no levels in FFXIII makes it even better. Even if you can only control one character, the paradigm shift battle system is still an extremely fun and challenging system – especially when you do the Cie’th higher level quest (Vercingetorix, Adamantortoise, Long Gui, Attacus were so much fun to battle). Maybe it may be boring to “hardcore” Final Fantasy fans, but for a relatively new player like me, I love it and I feel Final Fantasy XIII is a great game to draw in new fans for the franchise – I became one after playing FFXIII. Sure I missed the towns and the expansiveness of the world(s) other Final Fantasy’s created, but even still after completely the game and getting platinum, I was completely and utterly satisfied with my experience of playing FFXIII (I haven’t completed a game 100% in a long time).

Also the final cinematic was incredible, I loved it; everything the l’Cie lived for, fought for, struggled for, resisted for, endured and hoped for…all came culminating into a spectacular and brilliant display of human will power and the resolve for the endless. A scene filled with the raw and pure display of will power that brought tears to my eyes, it was brilliant.

I do question myself on why I think Final Fantasy XIII is such a great game and why I enjoyed it so much, and whether I’m right or wrong in what I believe. But irrespective of what is the right and wrong thing to think (because quite honestly, I have no idea what exactly is right or wrong), I can only understand what I feel and what I do feel is that I really REALLY love Final Fantasy XIII.

Looking forward to Final Fantasy XIII-2, especially with it having towns and more character interactions.

The animated sequence for this is mentally and physically awing, how breathtaking it is