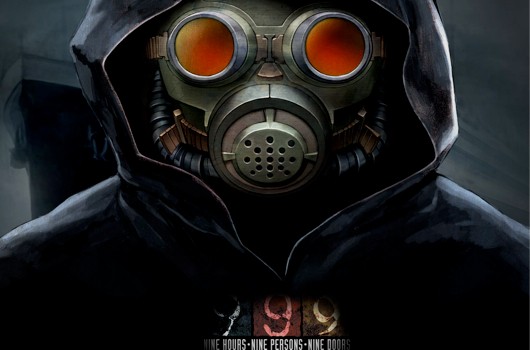 This past week I have been engrossed playing a game, that game is 999: Nine Hours Nine Persons Nine Doors. I’ll start by saying, 999 is without a doubt one of the best games I’ve ever played, I loved it completely and utterly. The experience I got from playing it and finishing it was so satisfying and euphoric, how compelling and gripping it was and what a refreshing wind it was to breathe in.

Beyond introducing the story setting and the images this post is spoiler free.

I learned about 999 when I was lurking the Enigma manga forums on mangafox. One of the threads compared Enigma to being similar to a Nintendo DS game called 999. Since I am finding Enigma very interesting (kind of like Saw, but this is a shounen version (less gruesome) take on the survival-horror setting) and I do love the survival-horror type setting in stories, my interest in 999 was immediately sparked. Fortunately for me, my brother had the 999 game on his DS =).

999 is an adventure game which takes place in a survival-horror setting. The gameplay is divided into two parts. The Puzzle part where the player must solve the puzzles that are blocking their way in order to progress the game, and the interactive part in which the player can talk to the other characters and make decisions that affect the story of the game.

Story setting:
Junpei is a college student who has woken up in a strange room, which he soon learns is a room on a boat. The last thing Junpei remembers is being drugged to sleep in his apartment by someone wearing a gas mask. He finds out that he has a bracelet with the number “5” displaying on it and that he can’t leave the room. Being forced to solve a puzzle and eventually escaping the room, Junpei encounters eight other people, each with their own bracelet with different digits on them. They soon learn from [Zero] that they were abducted and have been put on a boat which will sink in 9 hours. The 9 people are required to participate in this life and death game (the “Nonary Game”) where they must make their way through the numbered doors while solving puzzles until they reach a door with a “[9]” on it which will be their exit. 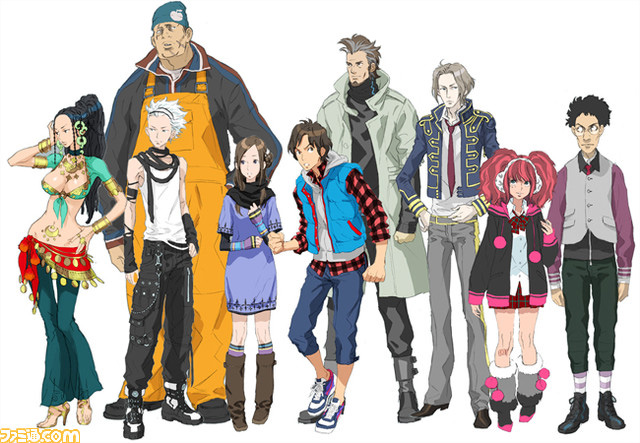 There are 6 endings to the game, and depending on the player’s decisions through the story, other characters can die and this is turn will affect the ending received. Only one ending is the true ending, but the normal ending must be achieved first in order to unlock the true ending.

I actually recommend going through the bad endings first, than the normal ending and than finally the true ending. That way you experience the best out of the game. While there are 6 endings the whole game is made up of all those 6 endings, not just one ending (the true ending). The other 5 endings serve as a build-up to the true ending, they reveal different facts about the characters and help you understand what is going on in the story better. Effectively one of those other five endings is only a cut-off version of the true ending – the ending you get when you follow the “True Ending” route before you complete the normal ending (“Safe Ending”). The bad endings help flesh out the characters and throw in extra hints to the mysteries happening in the story. I personally loved getting new bits of information after I completed the game each time, my brain was furiously trying to figure out just what was going on, who to suspect, what to do, what happened and what will happen. Each ending building up to the true ending wowed me, I literally had to put the DS console down and take a walk for about 10-20 minutes just to sort out what I had learned and reflect on just what was happening. 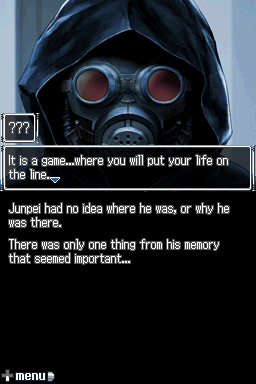 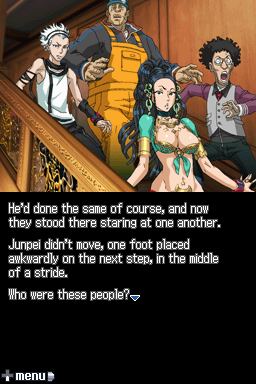 I am extremely fortunate in the endings sequence I followed. Initially for my first playthrough I was going for the “Safe Ending” (normal ending) but I remembered the final door wrong and ended up getting one of the bad endings – the “Axe Ending”. For my second playthrough, I had thought at that point that unlocking any ending would unlock the true ending so I followed the “True Ending” route, but I ended up getting the “Coffin Ending” and realised that I had to get the normal ending (Safe Ending) before the “True Ending” was unlocked. By than I already realised just how much each ending was adding to the story, the characters and the overall experience of the game, so I decided to save the True Ending for my last playthrough.

I ended up unlocking the Coffin Ending on my second playthrough, so I ended up playing the game six times (and I would gladly play it six more times if there were six more endings =P). After you complete a certain area once, you are able to fast-forward through the text on subsequent playthroughs.

The sound and music is also another great thing about this game. The simplicity and eerie nature of the sound and music helps create and establish a memorable and haunting atmosphere. When you combine this with the great artwork, brilliant narrations and gameplay of 999, you have something amazing. I never knew there could be so many different sounding door creaks, but those door creaks when the doors open adds so much character and atmosphere to the game. I even shivered several times when I heard certain doors creak.

999 was also educational for me – some of the theories explained in the game I found really interesting. 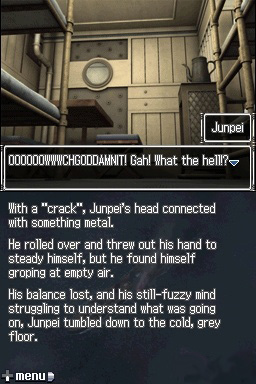 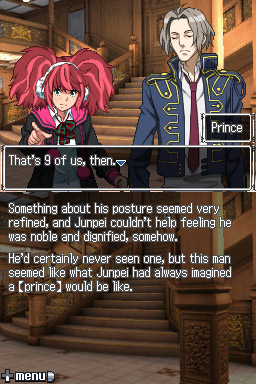 The text based dialog reminded me of Final Fantasy VII text dialog. Simple but extremely effective. A ton of emotion conveyed through just text (yes I cried here as well) and just like in FFVII, the humour in 999 makes the game that much more enjoyable. It’s strange when you think about humour and a survival-horror setting, they don’t seem to go hand-in-hand, but the humour is worked in so carefully and appropriately here, it seems natural and effortless and it adds so much to fleshing out character personalities, and to the atmosphere and emotion of the whole game. I burst out in laughter many times when playing the game (the elevator scene with Junpei and June was so hilarious – you can watch it here if you don’t plan on playing the game, but if you do, than don’t watch it!).

It was fun trying to guess what happens before it happens – it makes the experience of playing this game more enjoyable. More often than not I was wrong, and even when I was somewhat right, I was only partially right; as if I only had two pieces of a puzzle and was only perceiving one side of a two sided coin. You may reach the right conclusion (so you think) but even than you probably will not understand reasons behind certain actions and you may just find out what you thought was a conclusion was in fact just another piece to the giant puzzle that forms through the epic story of 999.

I have never been as impressed with a story for a long time as I have with 999. 999 totally ripped my eyes open to the painful realisation that anime now just does not have very good stories backing it (I have realised just how much better stories in games can be). I already noticed last year that the story aspect in anime was being focused on less and less and more effort was going into the character aspect of a series as that was the direction the industry was heading – the people who actually spend money are those who care more about characters than a good story (ie. K-ON – I haven’t watched it, but I am confident in assuming that there is hardly a story driving K-On). It almost seems that Anime Studio’s have realised that having a good story and good character development just isn’t what the current anime buyer is looking for today (I almost cried when I seen an informal ranking list about “the most “godly” anime of the first decade of the 21st century” with Angel Beats! taking the top spot…). Even Puella Magi Madoka Magica which boast a really really good story (and is probably one of the better anime of 2010 – I won’t say it’s the best anime ever like some people claim), the story didn’t impress me as much as 999. Quite honestly, if I take Revolutionary Girl Utena (a 1997 anime) from the list of anime I’ve watched this year, none of the series come close to how good I think 999 is. I guess the days of getting the occasional quality anime like Cowboy Bebop are over…

999 further shattered my perception that original ideas in stories in this day and age is hardly possible, but it proved just how ignorant I am and how little I understand of the world. And I don’t mind at all having that perception shattered =). I hadn’t realised a game could boast such a compelling and engrossing story. Maybe I underestimated games, maybe I overestimated my own point of view, but whatever the reason (it’s probably both =D), 999 gripped me, entertained me, and haunted me like no other story has in a while. I formed so many theories and thought off so many possibilities of what was happening during the game and how things would end, but even with those overflowing thoughts I was utterly surprised with the twists and developments. The experience I felt when finishing the game left me in bliss. That feeling of being left in awe, I couldn’t help but just lay on my bed staring at the ceiling with the heat from heater distorting the image of the ceiling with it’s rapid moving particles, almost as if liquefied. I just stared at it, eyes open and mind blanked, just left in awe. I laid on the bed oblivious of time, in pure wonderment, and before I knew it I realised forty minutes had passed since I finished the game and turned the DS off. 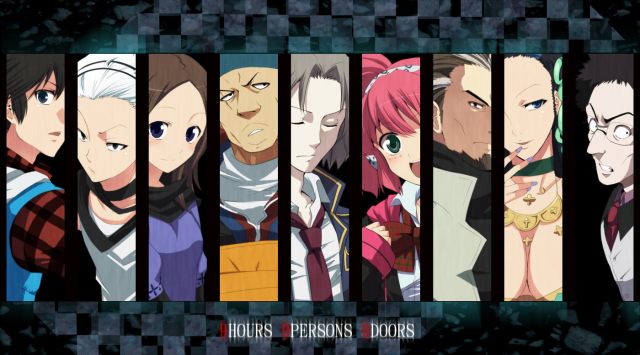 999 was a refreshing experience and is one of the best written games I’ve ever played, with an excellent cast, a suspenseful atmosphere and intelligent gameplay. Oh how I loved 999.

I want to play more games like 999 (I’d love a sequel to 999 please =P), the writing is just so good, it’s crazy how much I’m craving for games like this now, games that take writing seriously. I plan on reading the horror manga Doubt next and I plan on playing Ghost Trick: Phantom Detective at some point.