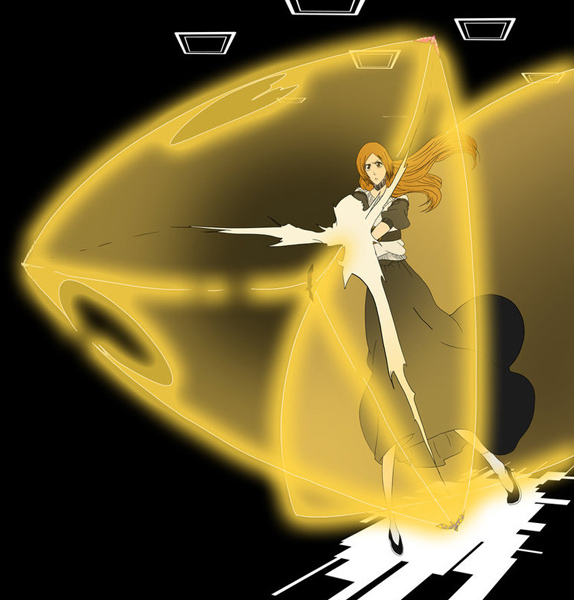 "The Defiant Shield of the Four Heavens" - Inoue Orihime burst forth with eyes wide open and her head held high.

…or beginning to anyway…

Oh wow, I’ll have to rate this one of the best chapter of this arc (Lost Shinigami Representative Arc) so far and it really got me interested in what else this arc has in store. The chapter may have began with stretching and dragging the suspenseful scene left from last chapter and it may have switched focus for the rest of the chapter but why am I not dissatisfied in the slightest? On the contrary, I’m extremely satisfied and excited right now.

The chapter began pretty awesomely, with colour pages and picking up with that suspenseful cliff-hanger from last chapter. I’m sure just like me there where tons of people dying to see who the Shinigami was, but thanks to Tite Kubo’s ‘masterful’ (and frustrating) ability to drag things on, he dragged all that suspense over 4 pages and then entirely changed the focus of the chapter the next page. I couldn’t believe it, the thought that Kubo would pull something like this was in my mind since a couple of days ago, but I didn’t think even he was crazy enough to do this, but he did…he carried that suspense through the whole chapter and left it hanging. When the focus shifted back to Inoue, I was literally “oh my goodness!!! No way, you can’t be serious? Is he going to drag it on all the way to the end of the chapter?!!”

But I was wrong, Kubo went further and decided to drag it on to the next chapter (how sad). And as annoying as that is, I don’t mind that one bit, because I was treated to something much much better. I was expecting silver, but I got gold =).

Something which I so desperately wanted and hoped to see for so long, that “something” which I began thinking would never come this arc, but just as my hope was fading, Kubo comes out and pulls this, surprising and satisfying me completely. That something is the existence of Inoue and Sado’s character development (I am a fan of both characters). They are part of the main character cast and I wanted to know how they really felt when they failed to help Ichigo [much] in the Arrancar saga, when they were thrusts towards and faced with the realisation that they are too weak and couldn’t do anything to help Ichigo. I wanted to know just what they thought about that, and just what they have done about that for this past 17 months. To put it simply, I wanted (so badly) to see their RESOLVE!!! And man was it shown this chapter. 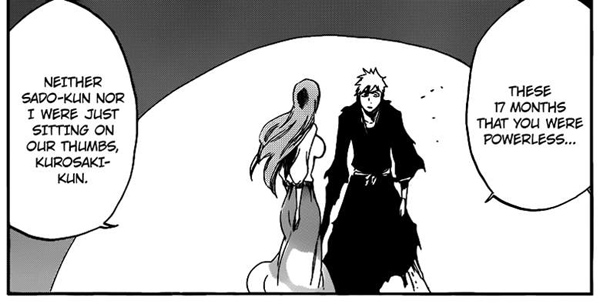 Being able to view what Sado is thinking and how he felt about certain events, and being able to see just how much Inoue’s confidence has grown and how she handled Ginjou’s attack was incredibly cool (“Don’t attack me when I say not to.” – hahah how badass). It’s great to know these two character aren’t getting left behind and aren’t being forgotten by the author =D.

Sado and especially Inoue wore their resolve magnificently. If I wasn’t interested in this arc before, I certainly am now; if I was bored by this arc so far, I certainly am not now. Everything in this arc is coming together nicely and even though slow, the story is developing into something really cool. With the addition of Sado added to the list of people Tsukishima cut, I’m now real curious as to what exactly Tsukishima’s Fullbring is (if that is what it only is). And what is the purpose of Tsukishima’s actions towards those characters (it does seem like he could have killed Ishida, Inoue or Sado if he wanted to, but he didn’t – I wonder why?), he truly is one mysterious character – I am even doubting if he really is a bad guy.

A desire turned into action. Wearing that resolve Inoue and Sado walk forward.

And the most important effect these developments have, is on Ichigo. He seemed depressed and frustrated at his weakness during this arc, he then desperately tried to get his power back with training, but there was just something that I couldn’t put my finger on that seemed totally odd about him. Maybe Ichigo was afraid or felt lonely or maybe it was Ichigo living a normal life for the past 17 months and getting used to that “reality” or it could just be Ichigo losing his Shinigami (and Hollow?) powers, but the Ichigo in this arc didn’t seem like the Ichigo that drove the story of Bleach in the past. Something was definitely missing (more than just his power). Now with this chapter and with these developments do I realise what it was, it was “reason”. It was the “weight” behind his resolve. Only now does he seem completely motivated and determined to attain that strength he seeks. Ichigo may have forgotten the feeling of fighting, Ichigo may have forgotten the feeling of protecting, Ichigo may have forgotten the feeling of “burden”, but now, thanks to his friends, that uncertainty and doubt which fogged his vision has finally began to fade. Ichigo is not standing alone, he has finally remembered and grasped the resolve he fights with.

With the mind cleared and the heart awakened, Ichigo grasps his resolve.

Anyway concerning the Shinigami whose identity wasn’t revealed this chapter (what a shame), it isn’t so bad when you think about having another week to guess who that Shinigami really is, it may even end up fun when you start forming theories about who it could be and/or who it couldn’t be O.o.

Suspenseful and mysterious, just who is that?

One of my theories last chapter was that it could be Rukia, but I wasn’t so sure about that as I didn’t see what purpose she could have (I’m assuming Isshin and Kisuke are planning to help Ichigo get his Shinigami powers back). But now with this chapter and Kisuke requesting the Shinigami to ‘stick some of their reiatsu inside that box(?)’ I’m beginning to believe that it could really be Rukia. Rukia is the Shinigami closest to Ichigo and so she would do quite reckless things and even stretch the Shinigami rules to help Ichigo. Plus Rukia is familiar with Kisuke and Isshin and they trust her (probably more than any other Gotei 13 Shinigami).

I still have my doubts as to whether it’s Rukia – if it was her, would Tite Kubo delay revealing who it was for so long? It could possibly be someone more surprising if Kubo is keeping us in suspense for this long (my guess would be someone from Division Zero – c’mon Ikumi) . Anyway I’ll keep cycling through my theories in my mind for the next week until the Shinigami’s identity is revealed =P.

This entry was posted in Bleach and tagged Bleach, Ichigo, JUMP, Manga, Shounen. Bookmark the permalink.